Almost 100 years ago, a radical artistic utopia was born in the contemplative city of Weimar: the Bauhaus. Its effects are shaping our life to this day. Against the backdrop of Bauhaus’ 100th anniversary, the documentary Vom Bauen der Zukunft – 100 Jahre Bauhaus tells a story not only about art, but also about contemporary history.

From the beginning, the architects and artists of Bauhaus, including Walter Gropius, Wassily Kandinsky, and Paul Klee, asked: How do we live together? What does ‘living together’ mean? How can spaces be designed in such a way that everyone can live together? With Bauhaus, art, design, and architecture became political. An art of space, thinking as much about the best distance between the bath and the toilet as the ideal chair, was created.

The documentary film Vom Bauen der Zukunft – 100 Jahre Bauhaus shows the history of the first Bauhaus group around Walter Gropius. Starting with the concept of Bauhaus as a social utopia, the directors question its evolution, its renewal and its inspirational power over the last 100 years.

The film is an eye-opening experience, much more than a history of building. It succeeds in portraying a cultural history of modern space thinking, which is captivating and enlightening. 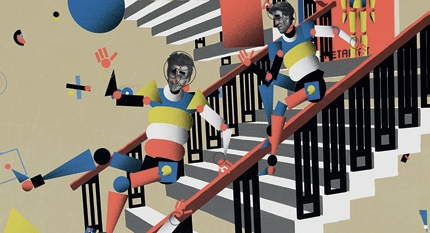