The Japanese designer Tadashi Kawamata is famous for his eco-friendly installations, which are always in tune with their natural surroundings. His structures have been installed all around the globe, including for Casino Luxembourg’s Sous les ponts, le long de la rivière II in 2005. He has recently been commissioned to design a playground in Kirchberg at the Parc Klosegrënnchen, which will be installed in 2019. The focus of the project is to involve the inhabitants of Kirchberg in revitalising this rapidly changing area of Luxembourg.

Tadashi Kawamata creates structures that encourage us to question their functionality, their beauty and imperfections, and our surroundings. These are the kind of installations Tadashi Kawamata comes up with.

Kawamata, born in Japan and currently working and living in Paris and Tokyo, often did not know what to do as a young child while his peers were sitting down to draw or paint. One day, he simply started picking up various random objects and created his first installation.

‘A designer should get his inspiration from the locals’, Kawamata says. ‘Sometimes I sit down with the locals and we talk to each other. What they tell me about their daily life or specific topics inspires me and my work.’ This was especially important for his project in Kirchberg. ‘We have a mixture of old and new infrastructures, areas, and grounds. I needed to consider what the community wanted or needed. So I talked to the children of the area and my new project was born.’

For Kawamata, it is important to use only natural and disposable materials; his installations are always temporary. He makes sure that his structures are completely safe and harmonise with the natural conditions around them. His most famous pieces include creations such as a giant swallow’s nest placed on the Vendôme column in Paris, tree huts and timber constructs at Madison Square Park in New York or an unusual pile of chairs stuck together at the Art Fair in Abu Dhabi. His work is influenced by architecture, urban planning, ecology, and sometimes even history.

Kawamata has a unique view of things and their environment, and a specific definition of what it means to be a designer: ‘A designer is not only an artist. Being a designer includes of course taking steps like getting ideas, thinking them through, and planning them out. But I believe every designer should primarily be inspired by the people living in the space they are working in.’

The Quartier Stuff Grünewald is an asbl (non-profit organisation) that was born out of the pilot project initiated by the Kirchberg Fund in 2015. The red container placed in the heart of the Grünewald (Kirchberg), baptised ‘Quartier Stuff’, became a meeting room for the district committee and a symbol of interaction and participation by residents. For more than two years, working groups of volunteers have been meeting there to analyze the needs of different stakeholders and to shape the district using Design Thinking methods. This new laboratory of urban innovation and citizen participation brought together residents and professionals from Kirchberg and the outskirts, of different origins, age groups, and levels of expertise, willing to create a more livable and animated district and to co-design the identity of Kirchberg. Nowadays, the aim of the asbl is to continue the creative process, to ensure an efficient participatory process, and a collaboration with the Kirchberg Fund as well as to defend the interests of the district’s residents.

Result of the first workshop with Tadashi Kawamata and the inhabitants of Kirchberg, spring 2018 © Photo: FUAK 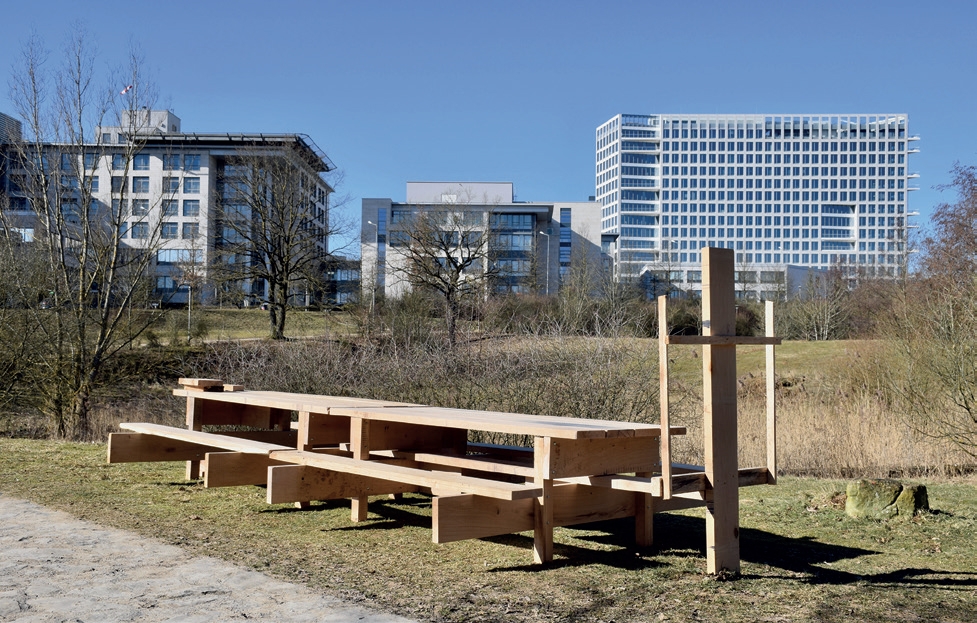