CinÉast participates in the Design City LX Festival with a screening of Flying Monks Temple, in which director Žanete Skarule tells the story of a unique architectural project enabling Shaolin monks to fly.

A dreamer by nature, Chinese businessman Quanqi Zhu decided to set up a unique installation on the hillside of the sacred Songshan Mountain in China, part of a mountain range in the Henan Province. The mountains are home to the UNESCO World Heritage-listed Shaolin Monastery, which is also considered to be the birthplace of Zen Buddhism and Kung-Fu martial arts.

Despite the language barrier, Quanqi Zhu’s closest companion is Latvian architect Austris Mailitis. Together, they invite monks from the Shaolin monastery nearby to participate in flying performances.

As construction of the installation began, the creators themselves had to hover between cultural differences, conventions, and personal ambitions. Quanqi Zhu wanted to bring the West to China; Austris Mailitis wanted to pay homage to Eastern philosophy.

Since then, Shaolin monks fly in the air in the world’s first building constructed for one of the most fundamental of human ambitions: levitation. 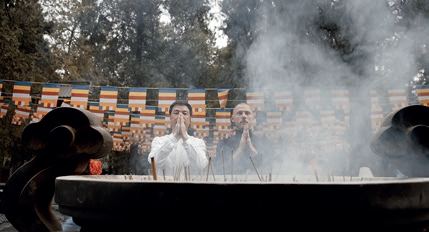